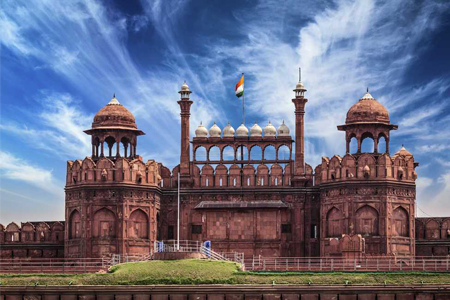 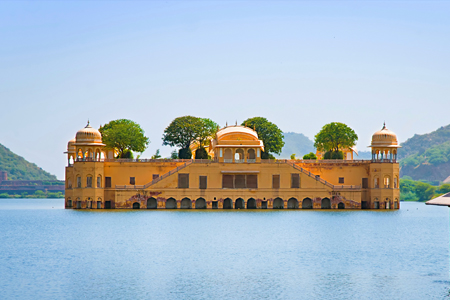 Morning after breakfast, proceed for sightseeing tour of Old Delhi and New Delhi
In Old Delhi visit Jama Masjid, Chandini Chowk, Red Fort, Raj Ghat – Gandhi Memorial
Jama Masjid – Built by Shah Jahan, Jama Masjid was begun in 1650 and it took hard work of six years of more than 5000 workers to build the largest mosque in India. It was customary for the emperor and his courtiers to go to the mosque every Friday for attending ‘Jumme Ki Namaaz’, the congressional prayers.

Red Fort (Lal Quila) – One of the most spectacular pieces of Mughal Architecture is the LalQuila or the Red Fort. Built by the Mughal emperor, Shah Jahan between 1638 and 1648, the Red Fort has walls extending up to 2 kms. in length with the height varying from 18 mts. on the river side to 33 mts. on the city side.

Raj Ghat – The Raj Ghat is the last resting place of the Father of the Nation, Mahatma Gandhi. The place is not far away from the banks of River Yamuna. Mahatma Gandhi was cremated here on 31st January 1950 following his assassination on 30th January 1950 by Nathu Ram Godse. The memorial stone is a simple square platform made of black stone. The last words uttered by Mahatma “Hey Ram” are inscribed near the black platform. An eternal flame keeps burning in a copper urn in the Raj Ghat. Thus the first item on the agenda of a foreign dignitary on a state visit to India is to visit Raj Ghat. They the memorial is set in a garden with fountains and a variety of exotic trees. The Gandhi Memorial Museum is just across the road. It houses many belongings of Gandhi and photographs from his life.
In New Delhi visit Birla Temple, India Gate, Qutab Minar, Lotus Temple, Humayun Tomb and Jewish Synagogue

India Gate- is the pride of Delhi. An imposing structure, the gate was built in memory to the of the 90,000 Indian soldiers who laid down their lives during World War I. Situated at the at the end of Rajpath, the India Gate is 42 meters high

Baha’i Temple (Lotus Temples) in Delhi is often compared to the Sydney Opera House. Popularly known as the Lotus Temple, Baha’i Temple is a major feature of Delhi and is well known for its appearance. There is no doubt that in years to come the temple will prove to be a mecca for the visitors. Baha’ism is considered to be a syncretism of the nine great religions of the world and traces its genesis to its prophet Baha’u’llah, born in Persia in the twentieth century.

Qutab Minar- one of the most visited places in Delhi. The unique architectural structure of the monument attracts many visitors from all across the world. The construction of Qutab Minar began in the 12th century and it was completed in the 13th century. Beautiful calligraphy of the magnificent tower adorns the adjacent edifices. The Minar rises over 230 feet and can be ascended by a circular stairway for a breathtaking view.

Humanyu’s Tomb – The last refuge of Mughal Emperor Humayun reminds rather of a luxurious palace, than a tomb located in the eastern part of Delhi. Humayun’s tomb is one of the best preserved Mughal monuments. This spellbinding mausoleum is the first example of Mughal architecture in India. After a century from its construction Humayun’s tomb inspired the construction of the more famous TajMahal. It was built thanks to the initiative of his widow HamidaBanu Begum, who commenced the construction of a mausoleum for her deceased husband in 1565, nine years after his death in 1572. The architecture of the tomb is strongly influenced by Persian architecture, the architect of the building Mirak Mirza Ghiyas himself was of Persian origin, constructed the tomb in the center of a Persian-style chaharbagh garden (translated from Farsi – four gardens) with quadrilateral form. The mausoleum stands on a massive platform which has a height of up to 7 meters, the building is constructed from red sandstone, while the tomb itself is made of yellow and black marble.

The beautiful temple built without steel, consists of 234 ornately carved pillars, 9 ornate domes, 20 QuadrangleShikhars, a spectacularGajendra Pith (plinth of stone elephants) and 20,000 murtis and statues of India’s great sadhus, devotees, acharyas and divine personalities. Themandir (temple) is a fusion of pink stone and pure white marble, where pink stone symbolizes bhakti in eternal bloom and white marble that of absolute purity and eternal peace. Akshardham was created by HDH Pramukh Swami Maharaj in fulfillment to the wish of his guru, BrahmaswarupYogijiMaharaj, the fourth successor in the spiritual hierarchy of BhagwanSwaminarayan. In only a short timespan of five years SwaminarayanAkshardham became a reality through the blessings of Pramukh Swami Maharaj, 300 million man hours of epic services rendered by 11,000 volunteers, sadhus and artisans and the immense sacrifice, austerities, prayers of hundreds of thousands of young and old devotees of BAPS Swaminarayan Sanstha.

(Note : No electronic items are allowed in the complex – No mobile phone, No cameras. One can take photograph from outside of the premises)

Return to your hotel and overnight.

Morning after breakfast, depart by surface for Agra  Arrive and check in at Hotel.

Afternoon proceed for visit Agra Fort – Built by Emperor Akbar, the maze of courtyards, mosques and private chambers of the fort echo the story of the Mughal Empire. The Moti Masjid and other magnificent buildings reflect the skill of the ancient Indian architects and artists.

Early morning proceed for visiting Taj Mahal- Built by Emperor Shah Jehan in memory of his beloved Queen Mumtaz Mahal, this beautiful mausoleum in pure white marble is an architectural marvel. The Taj by sunrise and sunset is a breathtaking sight.

Return to hotel for breakfast, later depart for Jaipur. En route visit Fatehpur Sikri – Situated 40 kms from Agra, this deserted city of Emperor Akbar literally means ‘The City of Victory’. The audience halls, palaces and mosques are still perfectly preserved as are the Panchmahal and the Buland Darwaza.

Continue drive to Jaipur
Arrive and check in at Hotel
Overnight at hotel.

Later visit the Birla Temple and local market.
Overnight at the hotel.